With some of the world's largest populations and fastest growing economies, D3 recognizes the growth potential and seeks to understand the attitudes and opinions in this region. 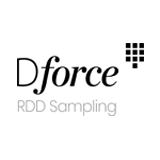 With decades of international collaboration, our research is tried and true.

Learn More About Our Work