D3 is excited to announce we have hired three new analysts to join our team in 2018 – Natalie Armel, Victoria Ferraro, and Connor Hirsch.

Natalie Armel, D3 Research Analyst, joins D3 from the Maryland Judiciary where she worked on both quantitative and qualitative research projects. Natalie holds a M.S. in Applied Economics from John’s Hopkins University and a B.A. in International Relations from Lynchburg College.

Victoria Ferraro, D3 Assistant Research Analyst, is a recent graduate of the University of Rhode Island. At URI, Victoria graduated with a B.S. in Applied Economics and a B.A. in Political Science. As an undergraduate, Victoria spent a semester at the Instituto de Filosofia in Havana, Cuba where she studied political economy, philosophy, and international relations.

Connor Hirsch, D3 Assistant Research Analyst, is a recent graduate of American University where he earned a B.A. in International Relations. Connor pursued a concentration in National Security and Foreign Policy at AU with academic and professional experience in Europe, South Asia, and the MENA region. 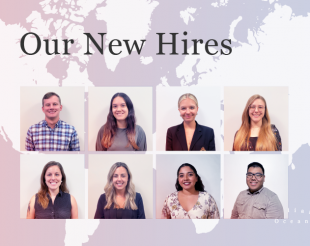 It’s official: D3 has never before had a larger number of staff! We are pleased to announce that we are expanding our team to help keep up with the new research opportunities that have emerged in 2021! Please join us in welcoming our newest members: Brittany, Brina, Ricki, Libby, Jake, Shelbie, Jeffrey, and Kriscel. Brittany […]