D3 Systems has released its survey-based analysis of differences in the conditions and attitudes of women in Syria and Lebanon. The paper, entitled “Gender, Policy, and Public Opinion in Syria and Lebanon”, is the twelfth installment of D3’s Women in Muslim Countries (WIMC) Survey Conducted in twenty-six Muslim-majority countries, the WIMC study is designed to measure women’s empowerment in actual daily practice, providing a deep look into the oft-perceived gap between current public policy and empowerment initiatives and actual practice on the personal and local level.

The surveys reveal that a majority of women in Lebanon express a greater desire for more personal wealth compared to other goals, while pluralities of Syrian women desire improved education and health. Majorities of women in both countries believe their rights under the United Nations Convention on the Elimination of All Forms of Discrimination Against Women (CEDAW) are protected and promoted within shari’a law.

The majority of Syrian women self-identify as homemakers, which is also true for a plurality of Lebanese women. Yet Syrian women tend to possess an entrepreneurial spirit: 70% tell us they are interested in and able to take advantage of the opportunity to start their own business compared to 48% of Lebanese women.

The findings suggest that attitudes among women in Syria and Lebanon are more closely aligned than one might imagine. Marginalization of women’s status is a shared legacy in both countries. However, noticeable differences in opinion emerge in areas of socio-economic status and personal desires. The study sheds light on how historical events of the past impact issues in women’s status within each country today.

WIMC is conducted and sponsored by D3 Systems of Vienna, Virginia, USA. The Syrian and Lebanese surveys consist of interviews with randomly selected women in each country. The respondents were interviewed by native speakers. Syria’s n=505 were interviewed by telephone May 13-24, 2008. Lebanon’s n=508 were interviewed in person October 15-20, 2008. The margin of sampling error for the study is /- 4% at the 95% confidence level. 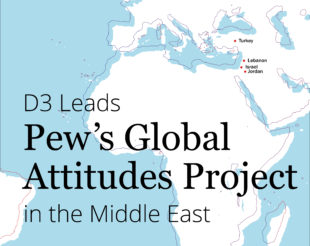 D3 is proud to announce that the Pew Research Center recently released results from their annual 2017 Global Attitudes Project (GAP) results, which include findings from countries where D3 managed data collection: Israel, Jordan, Lebanon, and Turkey. A primary objective of the GAP initiative was to collect international opinions of the United States, President Donald […]